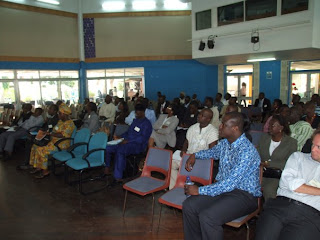 The two day seminar in Accra was at the British Council. After a brief welcome from the Deputy Director of the British Council in Accra, and an opening address by myself about the nature of research in our field, and what we are looking for, the event was formally opened with a welcoming speech from Professor Kwasi Kwafo Adarkwa, the Vice-Chancellor of Kwame Nkrumah University of Science and Technology. We also presented KNUST with a hard copy of the entire back-catalogue of Construction Management and Economics, as a gift to the library. We hired the British Council for the venue, and arranged the refreshments and food, so that the delegates had only to turn up and take part. We did not charge them for attendance, this being the first time we had tried anything like this. The turnout was excellent, and there was a lot of enthusiasm for the event. It soon became clear that there had not been an event focused on the built environment in this region before. 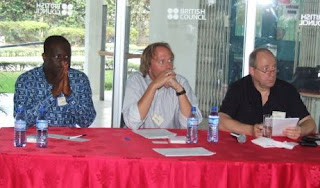 Over the course of two day, 32 PhD students and prospective PhD students presented their work to the audience. Each presented for ten minutes, and then there was a ten minute critique and discussion, lead by the panel. We paired up presentations, so that the discussions could have the space to develop into something interesting. The sessions were all chaired by distinguished academics from the region, and this helped to keep the pace moving along. In many cases, the work being reported was at such a preliminary stage there was not much to discuss, so suggestions were made instead. What was intriguing was that although some of the criticism was quite harsh in some cases, the speakers took it on the chin in good spirit, and saw the experience as an opportunity to learn and develop. It was indeed refreshing to be among people who valued criticism, and did not see it as an affront to their dignity, as can happen in some parts of the world. 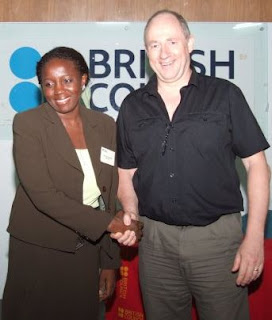 The range of work that was presented was broad. Despite our efforts to keep the focus on construction management, there were some presentations on materials science, some on property valuation, and even one from an artist on the representational aesthetics of palaces in Nigeria, or something along those lines. The quality, as well, was extremely variable, and so when one delegate presented a piece of work that was coherent, clear, well connected to what had gone before, and likely to produce something worth knowing, we decided to implement a prize for the best presentation. This was awarded to Mrs Kulomri Jaule Adogbo of Ahmadu Bello University in Nigeria. It was a pleasure to see such good work. Some of the other presenters were just setting out with their research, and so we had a huge range of quality, from clearly enunciated, well-paced and easy to understand through to garbled and incoherent embarrassment. But everybody’s got to start somewhere. Whatever was presented, there was a good discussion and in each case, constructive advice emerged from the various contributions to the debate. Here is a short list of some of the topics that are being researched in this region:

A couple of themes came up in many of the presentations. First, there was clearly some confusion as to what constituted academic research. Many presenters were clearly setting up a piece of consultancy work. When it was pointed out to them that this was not research and would not satisfy the requirements for a PhD, there was some confusion. In the end, we simplified the message down to “if you are doing what practitioners do, you are doing consultancy. If you are examining or analysing what practitioners do, it is research”. This was something that had to be hammered home, but is also a regular problem in CM research the world over. Second, few presenters had come across the idea of research methodology. As usual, the word was bandied around a lot as a heading, but as usual, it heralded a discussion of methods. The distinction between methods and methodology was as difficult to get across here as anywhere. One metaphor that seemed to work was cooking – a recipe is a list of steps that are to be used in preparing a dish, but the recipe does not tell you why these steps work. Such is the difference between explaining what steps were involved (research methods) and explaining why they were chosen and how they generate data and information that will usefully address the questions (research methodology). Another frustration with research methods was the preoccupation with survey questionnaires and the notion of preparing some kind of model. It is a common feature among new researchers to assume that social science research requires a questionnaire survey. It doesn’t. There are so many research methods that might be used, and the lack of variety in approaches to hugely varying questions indicated that few of these researchers were aware of the literature on research methods. So we frequently pushed people to carry out some review of research methods before they did their fieldwork, and in many cases we told them that a questionnaire survey would simply not answer the questions they were asking. However, some of the research studies were well designed with appropriate methods, and over the two days we saw the full range from expert to novice.

There was a strong sense of occasion to the event. On the second day we were featured on the radio, Ghana Broadcasting Corporation, at breakfast and on the six o’clock news. Sadly we were too busy to find a radio and listen, but a journalist from the GBC was with us a lot of the time, and this hammered home to us just how unusual it was to have a workshop/seminar of this kind in West Africa. And although it was based on Accra, Ghana, the vast majority of the delegates had travelled from Nigeria. They had a meeting among themselves after the seminar was over, because, it seems, this was the first opportunity they had had to meet as a group.

Overall, then, this seminar was a resounding success. Something like 80 people spend two days sharing views and knowledge about the research process and how academic research can be applied to the practical problems of management in this particular industry sector. We all learned a great deal, and there is a genuine commitment to running this again in the not-too-distant future. There is now increased interest in the journal, Construction Management and Economics, and we have opened up a huge range of networking opportunities for collaborative work in the future. The next step is to set up a website for WABER, to record what we achieved at this inaugural seminar, and provide a space for discussion and development. This was an excellent venture in every respect.

By Prof. Posted by Will Hughes

The Minister of State in charge of Tertiary Education,...

The two day seminar in Accra was at the...

The two day seminar in Accra was at the...

The Minister of State in charge of Tertiary Education,...